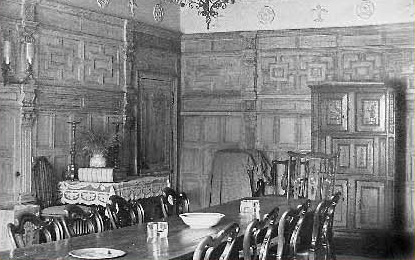 1. Rodney Collin Smith, claims in his The Theory of Eternal Life that Ouspensky’s last weeks were a play, modeled on the drama of Christ’s death. “Of my own teacher I can only say that he also produced among his friends a play, of which they unwittingly but perfectly played their parts, and whose plot was his own death”.

This notion is not very surprising since Ouspensky had an obsession with the New Testament as a conscious work of art, discussed in Esotericism (ΙV): The New Testament (A’) and (B’), and regarded Jesus’ life and particularly the last days, as presented in the New Testament, as a Holy Drama the roles of which were fixed in Eternal Recurrence but with different persons taking on different roles and the chief disciples aiming to play Jesus’ central role.

In the intense and unbalanced emotional conditions prevailing in Lyne Place in late September (1947) it is rather natural that highly strung Collin Smith and others should see the situation as a repeat of “holy drama”.

2. That all life is a dramatic performance, a theatrical play, is a very old notion found, among others, in Shakespeare’s plays, in Epictetus’ essays etc. We human beings are but actors in a play written by an unknown author.

Here, according to the writer(s) of Last Remembrances of a Magician, the writer and director is Ouspensky who is preparing for “recurrence”. Thus Ouspensky’s decision to go to America and then, just before embarking, not to go signalled the opening of the final play, or final act of a play.

“A test, both of decision and understanding was created for every individual concerned. As a result… the stage was automatically set and the characters arranged for what he proposed [= Ouspensky] to do” (ch 4, p 30).

Ouspensky then said “I never intended to go to America – not for a minute”. But back at Lyne the following morning, he sent a telegram to Miss Q who was travelling on the “Queen Mary” to America saying he intended to go to America but “under his own conditions” – a phrase often used by Ouspensky. And a few days later he re-affirmed his decision of going, saying to Collin Smith that arrangements should be made immediately.

3. Thereafter, all arrangements in Lyne, whether for meals in the house or for trips in the countryside, were laid out “as if in a stage set waiting for actors who had missed their cue”! This is a dialogue specimen:

Miss P: Are they born with them?

Ouspensky: No, kittens don’t have

Ouspensky: Some dogs but all cats.

“Every phrase seemed also to refer… to them and to the possibility of creating a new body, the greatest mystery of all”.

But the play is not merely a play but a drama in the Gospel style. For when a murder is mentioned the word ‘murder’ seemed to connect “with the killing of a man’s old personality: but this they did not know at the time”. (ch 6, p 43, my italics highlighting an echo from Gospels).

4. Phrases echoing the Gospels appear again in the same chapter 6.

Ouspensky sat in the car resting between Dr Roles and Collin Smith. “And he spoke to them in such a way that each heard what was addressed to him, and nothing of what was said to the rest” (p 46).

And the chapter closes with this statement: “So they all went away to rest, and to remember everything that had been done”.

But the exchanges of the actors are muddled, or pedestrian, or pretentions. Thus Ouspensky speaks (seemingly of “reconstruction”) pointing to a picture of Moscow on the wall and saying he and his grandmother were there and Mme Ouspensky and the mysterious Evremov who might be of the period of 1916 or of Peter the Great!

Then Ouspensky says: “Madame’s people different way. My way theosophical way. I was at many places in India and Ceylon. No religious words, but still the same”.

5. “They began to understand things”, in chapter 8, “which [Ouspensky] wished to convey to them without being told, or in single sentences and phrases they would see some extremely subtle and illuminating significance, which they knew very well they could never have invented for themselves. Moreover, they began to feel every gesture and situation as meaningful just as they are in a play, where nothing is introduced which does not relate directly to the plot… And in the whole situation… Ouspensky was doing in some normally inconceivable way – moving, arranging, combining and experimenting with human material without any visible or audible direction” (ch 8, p 57).

At the end of the “classified” part of ch 14 we have again theatre as Collin Smith feels he had “known these words before. They were the words of a part. He said, speaking his own part: ‘Traitor and disbeliever get out of this room!’ He was addressing Dr Roles, friend and fellow-disciple!

Then in ch 15, after he has shut himself in a room for a week and after Ouspensky has died and been buried in ch 14, Collin Smith emerges from his isolation and on Oct 4th, two days after Ouspensky’s death, he goes “to Ouspensky’s bedroom. It was empty”. And this, of course, reminds of the women going to Jesus’ tomb and finding it empty after the resurrection!

So much effort for a fantasy.