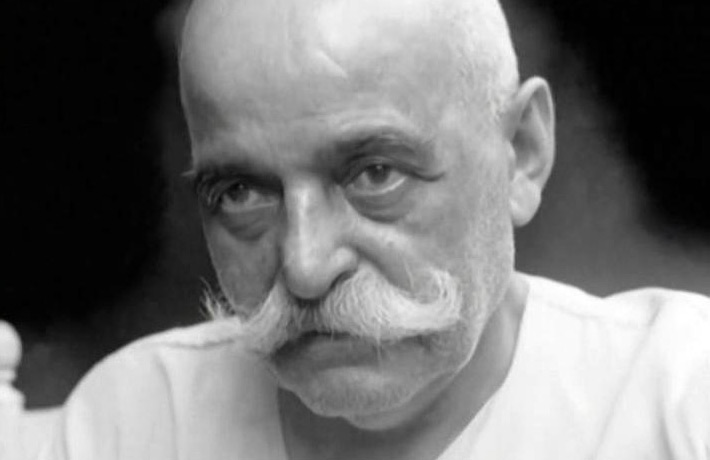 1. Many appeared as G’s successors after G’s death in 1949. We shall examine the inevitable proliferation later. In this my first paper on the subject, I start with G’s first choices that proved unfit and abandoned him (and his teaching).

G’s first choices were successively Ouspensky, Orage and Bennett, though he did allow others to teach in the interim – J. Toomer, Mrs. O. Wright, (both in the USA) Jane Heap (in Britain).

Some abandoned G’s teaching altogether, like Orage and eventually Toomer. Others modified it or introduced foreign elements and new practices – Ouspensky and Bennett.

2. Ouspensky broke with G completely in 1924 having set up his own groups first in Constantinople and in 1921 in London. He never really and truly gave himself to G’s work as a genuine student but at the same time he, better than anyone else transmitted G’s teaching for contemporaries and recorded it for posterity, in his book, In search of the Miraculous which G had seen long before its publication in (1950) and approved fully.

Ouspensky absorbed superbly with his intellect G’s system but emotionally revolted against G’s method of playacting, changing tactics and delivering shocks. So he separated the teacher from the teaching, as he put it nicely (but in self-justification) and eventually broke completely from G.

Some gurdjieffians thought subsequently that O was selected as a future successor. It is possible but then one must wonder at G’s lack of insight, which is also possible.

G’s solid gain from O’s studentship of 8 years is that O made G’s teaching known widely and helped in this way for G’s settling in France (with money from many of O’s acquaintances).

3. It is possible that G never intended O to be his successor. So it seems to me. G knew that O, though very honest, was too much of an intellectual and too self–important to follow anyone as a teacher for long.

But I think G definitely blundered with A.R. Orage.

G must have seen that ARO was only superficially an intellectual and, unlike O, essentially emotional. Like O, ARO had a flashy intellect with which he absorbed easily abstract or metaphysical notions and literary issues. Thus he had read Plato, knew well Nietzsche’s work, was deep in occult studies and theosophy and had studied the Indian Mahābhārata and practical aspects of Yoga. ARO became O’s student but when G gave a lecture in London (Feb 1922) he realized that G was the teacher and O, despite his intellectual brilliance, the student.

4. Orage arrived at G’s Institute at the Prieuré in October 1922. G had already recognized ARO’s potential and so placed him in a strict discipline of exhausting physical labour that at once reduced his excessive weight and assumed intellectuality bringing to the fore his emotional side – the side that had perceived that G was superior over Ouspensky and that his own intellectual life had been a waste!

In his biography of Orage, Philip Mairet writes: “No other pupil… served Gurdjieff with a more implicit obedience than Orage, [who underwent] … severity of apprentiship… rigors… psychological bullying.” (A.R. Orage A Memoir p xxix.)

5. G took ARO to New York in 1924 and gave him permission to give public lectures and form groups. And this ARO did for the next 6 years. It was there that ARO met and fell in passionate love with Jessie Dwight. G disapproved but ARO married his beloved and had two children with her. He had helped G with translating G’s work Beelzebub’s Tales to his Grandson into English but now (in May 1931) he left the Work and went back to England where he turned again to publishing a literary Magazine.

G should have known that starting at the age of 48, Orage’s 1 year with Ouspensky and 2 years at the Prieuré were not enough to prepare him adequately for the more serious role G intended him in the USA.

That G did not, suggests a flaw in his perceptivity. He may well have misjudged Ouspensky as well.

When I wrote this (late Nov 2017), I had not read Marie Seton’s essay on O, published in the Quest in 1962. She had worked as O’s secretary in the early 1940’s in America. Her Memoir is full of revealing gems.