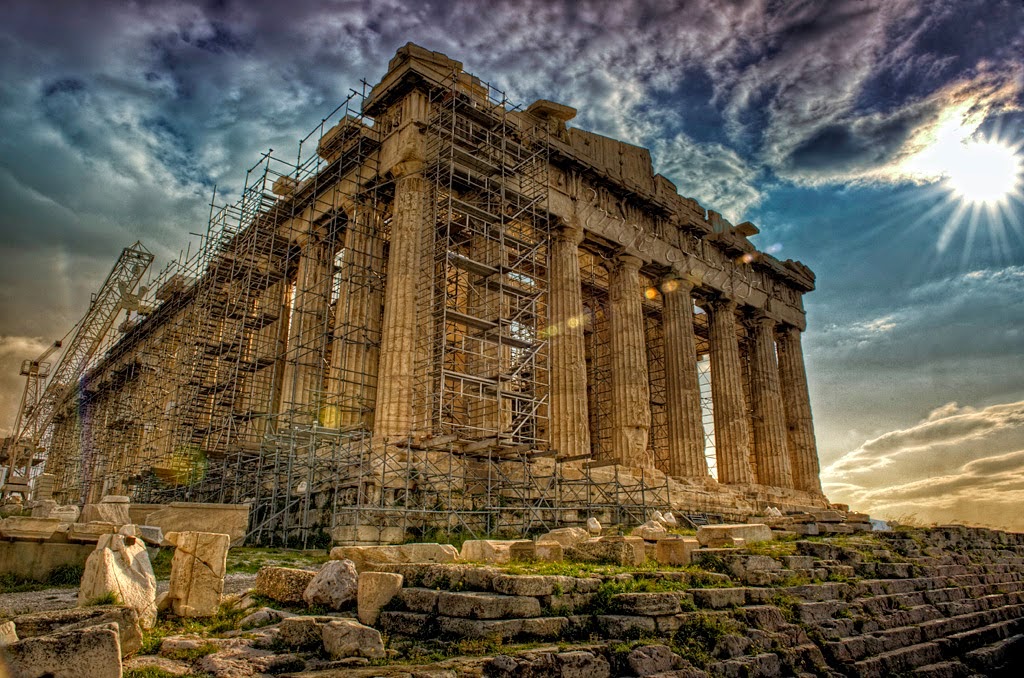 Thanks for your comments and queries. Three issues: the reputation for honesty enjoyed by the communists; the size of the Public Sector; the common practice of borrowing by all countries.

1. In Greece the honesty of the communists, including of course all leftist and Syriza, is a very cleverly perpetuated myth. It is founded on skilled propaganda, the simple fact that they have not governed and the gluttonous gullibility of the schizophrenic masses who need to have honest heroes to worship. I use the term schizophrenic advisedly; in two recent opinion polls (26/4) more than 70% want to stay in the Eurozone and express great fear in case we leave it, yet 36% propose to vote Syriza (half of whom openly declare their desire to leave the Euro and return to Drachma) and the total of three pro-european parties amount to only about 30% !

Now that the communists govern the myth was exploded within the first month – in three distinct ways.

One, many of their promises and announcements are now seen to be blatant lies. And they continue to lie since their entire mentality is based on and imbued by lies. E.g. after every meeting of the Eurogroup the spokesman or some officials of our govt will announce that the discussion went well and the Europeans are nearing the Greek positions and an agreement is imminent – with sickening frequency for three months now. The actuality is that no agreement is near and the Greeks refuse to provide the necessary data!

Second, two at least members of the govt made lots of money by promoting cases in court of civil servants who got sacked in previous years. One of them is now the Minister responsible for re-employing thousands of former employees!

Third, the govt members have openly proceeded in massive appointments to public offices of their relatives, friends and party-members – a practice they castigated in the past!

The extensive use of the Civil Service for such appointments has resulted in an enormous, highly inefficient, corrupt Public Sector. As the State expands and sprawls so do bureaucracy, inefficiency and corruption. And the costs of running it.

2. Our Public sector is very costly. In any normal country, say Denmark, when the government changes, only the minister and his secretary change. Here the new minister will bring as many as twenty new “advisers” with him, as well as appoint relatives and cronies elsewhere! The state-run Sugar Industry has an annual deficit of several millions. But it is kept with the tax-payers’ money so that appointees stay in their posts despite their inadequacy. The same applies to the state-run public transport – except the Athens underground Metro.

The Private Sector has dwindled and is weakening even more intensely now. But even at the best of times it did not produce enough to provide adequate taxes to cover the costs and deficits in the highly unproductive Public Sector.

This borrowing is regarded as normal.

3. Such borrowing is most unnatural. And the interest paid is even more so.

Usury was prohibited in the ancient-most Indian Vedic Tradition and in early Christianity. In fact, you gave goods or money to a man in need, if you wanted, but did not expect any profit on this, not even the return of the goods or the money! That is how it was.

No reasonable household would borrow, because it would not spend more than it earned or had in stock. Foolish people overspend, then borrow. But if you have to borrow, then surely you are spending more than you ought. The reasonable thing to do, however unpleasant and undesirable, is to forgo things you want and cut down your expenses.

Now, it may happen that some difficulty, an accident, an unforeseen event, necessitates extra expenditure. Then of course, one would have to borrow; but at reasonable terms and no more than what is strictly needed. And then one would have to economize as much as possible to repay the debt!

The same applies to any well-run enterprise. Otherwise it will go out of business.

The same should apply to a nation. A State should never spend more than it produces. If it must import goods, then it must produce enough to balance the cost of imports. In fact it should produce a little more and have some reserve funds for unforeseen future needs – an earthquake, a flood or a similar calamity, or some public work. But it should not borrow in order to indulge in an expensive welfare progamme, however desirable, or to generate public works or to employ redundant people in the Public Sector.

The masses have gone utterly crazy and borrow incessantly. So do nations.

There are no free meals! Someone somewhere somehow sometime has to pay the cost. Reasonable people understand this. Governments also should understand this thoroughly.

4. We come back to the issue of education.

It is imperative that people are educated very early on about basic duties such as not spending more than one has or earns. It is preposterous to do otherwise.

Nowadays we all talk of rights – especially the foolish fringe of socialists and communists, but even well-intending people.

We don’t understand the fundamental condition that rights depend on duties.

Rights are meaningless if others do not feel they have the duty not to infringe them. What use is my inalienable right to free expression and movement or even to my life, if others decide to abduct, imprison or kill me?

This clamouring for rights and rights and rights is expressive of widespread stupidity. If to this is added all the noise about democracy, socialism and other related meaningless terms, then the sad overall condition is one of madness.

What people really want is neither democracy, whatever this means, nor socialism, but simple justice. Only through justice would everyone receive his/her due and, particularly, the produce of their work.

Justice is secured only through the people’s adherence to duties –not all the claptrap about democracy and democratic rights.

It is everyone’s duty to use all one’s faculties in life otherwise they will droop and wither. The chief of them is reason. And reason dictates that one does not spend more than one earns: one forgoes things, cuts down expenses and learn to live within one’s means.

And this is what the Greek people should do and stop – especially this new government of incompetent communists – clamouring for more and more money.