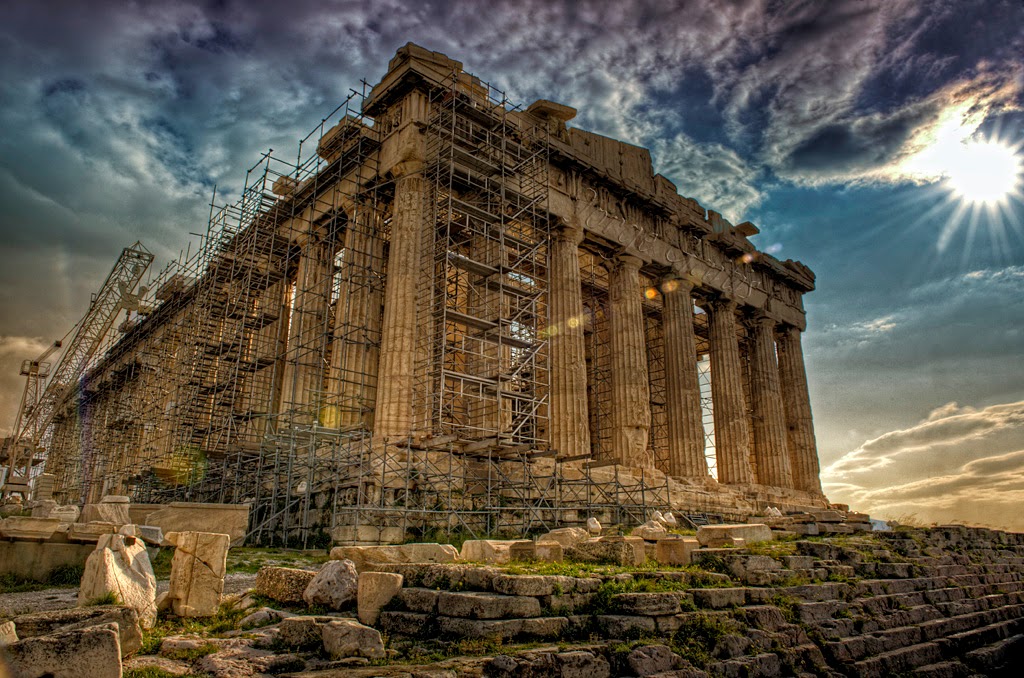 We both know that you speak no Greek and that my German is third-rate. So I turn to English to reply to your queries about the present economic impasse in Greece.

There is in fact no solution such as the Greek government envisages or the Europeans and the International Monetary Fund propose. The problem is not strictly economic or political.

It is primarily and mainly a moral problem. This issue needs another approach.

1. Our education (upbringing in the family and schooling in general) has been, since the end of the war, that is for about 70 years now, very poor and is becoming increasingly worse: while emphasis was laid on the barren idea of love of country and its glorious but irrelevant past but not the virtues that produced that glory, the technical side, the system of actual teaching at all levels, is in the last decades determined by political considerations and the selfish desires of those who teach: more money and vacations and protests against “the system”. As a result we have become a nation of impostors, frauds and crooks whose main aim is “getting and spending” and pleasure.

By extension the State itself, the governments and the entire CS (=civil service), is very corrupt and thoroughly inefficient.

This is not say that the compassion and hospitality associated with Xenios Zeus is gone.

2. The Public Sector is enormous with many unnecessary organisms and industrial or commercial concerns, wherein are appointed family-members of ministers and members of the ruling party. The present left govt  severely criticised this unashamed nepotism but now, in less than three months since their election, they practice it themselves even more ardently.

In the past numerous laws were passed necessitating permits, licenses and certificates for all kinds of things and activities resulting in further inefficiency and flagrant corruption as people bribed officials to expedite their particular interests.

Note also that we have more than 40 ministers in the cabinet – as many as Britain! We have 300 members of Parliament whereas Britain with six times our population has only 600 and your country and Holland keep the same proportion.

3. The immorality affects the Private Sector as well: greed is rampant. Entrepreneurs try to make deals with the govt and enjoy favorable treatment in getting State contracts and special taxation. Most of them don’t plough their profits back into their businesses for improvements, diversification and expansion but send them to accounts in foreign lands.

4. Trade Unions and Syndicates have been often violently agitating and succeeded in getting higher wages and pensions mainly in the Public and less so in the Private Sector.

Production has not increased correspondingly. In fact imports alone increased enormously generating a very large deficit in the balance of payments.

The apparent prosperity, the increase in salaries and pensions, has been effected with heavy borrowing by successive govts. The largest borrowing occurred in the period 2004-9.

5. In 2010 it was acknowledged that we were bankrupt and we invited the IMF, the European Commission and the European Central Bank (= Troika, now renamed ‘Institutions’), to rescue us with heavy doses of cash at very low interest.

In return we accepted a Memorandum that demanded reforms. Instead of diminishing the corrupt, inefficient and highly wasteful Public Sector, successive govts increased taxation and cut down wages and pensions. As a result the productive Private Sector was crippled: thousands of enterprises closed down and unemployment soared to 28%. Whenever attempts were made to diminish parts of the Public Sector, there were strikes and violent demonstrations – led chiefly by the Communist party and Syriza (= the new govt).

6. Tsipras and his “radical left”, who are stalinists to the marrow, received a majority of only 36% but they claim they represent the Greek People. In one sense, that of arrogance, greed, incompetence and ignorance, of course they do.

They formed a strange coalition with the right, almost fascist, party of Kammenos (ANEL = Independent Ellines).

The new regime refuses to reduce the Public Sector, to privatise bankrupt government-run enterprises, to abolish early retirements (occurring even at 50 and sometimes earlier!), to open out closed trades (taxis, pharmacies etc) and bring in other measures that will encourage work, investments, competition and production generally.

Instead, they wish to appoint more thousands into the CS and restore wages and pensions to their pre-crisis levels! (It is the age-old corrupt practice of securing one’s clientele of loyal voters – with rhetorical terms of socialist claptrap that they are committed to help the poor and institute policies of economic development according to their pre-election promises.)

7. Now they might achieve such ends only if they had sufficient money, i.e. if they received new loans from the IMF and the ECB. But they refuse to proceed with the reforms that will secure a check on expenditures and encouragement of investments and production. They claim, that they’ll chase tax-evaders, tax illegal hoarding abroad, stem illicit trade in petrol, alcohol, cigarettes etc. – exactly as other govts had done earlier without any success.

Blinded by their stalinist beliefs, they ignore the fact that Cyprus, Portugal and Ireland (and earlier the Baltic States) went through similar Memoranda and managed to emerge clean and strong enough to advance now in economic development without need of foreign aid.

8. Some Europeans, present or former officials or newsmen, feel sorry for the plight of the Greeks and advise that more money at very low interest should be given to this govt to try out its left policies and alleviate the people’s suffering. I think they are thoroughly misguided.

The plain fact is that this regime cannot reform the economy even if they had the money. They refuse to see the stark realities of recent history that no communist regime has survived (except North Korea) and that no left-wing policies succeeded anywhere – except to produce dictatorships, oppression of, and suffering among, the people, as now in Venezuela. In addition they are ignorant of real politics, diplomacy and administration, and, more important in the long run, they disagree among themselves, even within Syriza; they are held together at the moment mainly by their desire for dominion.

Personally, I doubt very much whether they can accomplish anything good. In the almost three months they are in power they have failed abysmally to make improvements in any area of the economy. In fact, their prevarication and incompetence have generated much uncertainty, fear and loss of confidence, together with the reduction of liquidity. People (those who can) send their money abroad or invest in foreign bonds etc; nobody invests here; many enterprises are on the verge of collapse and soon unemployment will be climbing up again.

9. One strong section of Syriza with several ministers in the cabinet advocates Grexit – our exit from the Eurozone and return to our former national Drachma (at the time of the change one Euro was exchanged for 341 Drs). They are not the majority but it looks all the more likely that Tsipras and the rest of them will opt for this if their demands are not met; for they say they don’t intend to abandon wholly their pre-election commitments.

Here they fail yet again to see that they will be in no position to fulfill their promises once out of the Eurozone. The ensuing misery will be abject beyond imagination – except by what we know from other countries that have trodden this path like Argentina. Our lot will be far far worse.

Unlike Argentina, we have no natural resources to speak of – no grand agricultural and industrial enterprises. We import all our petrol, cars and spares, heavy machinery and specialised tools; also computers and telephones, most medicines and even corn and meat and some vegetables! We simply don’t produce, or don’t produce enough.

All these imports will cost probably six times as much making the present recession look like paradisal prosperity.

Yet, such is their attachment to their anarcho-left ideology that they are unable to realise they’ll lose power, anyway, unless they adopt ruthless Mafia practices in the ensuing chaos.

10. But of course, as you well know from your extensive studies in classical Greece and in the Vedic tradition, the matter does not end there.

As we know from Plato, the first function of Government is to dispense Justice rewarding the good and punishing the bad and, thereby, raising through the best education the citizens to excellence. With new laws our new regime releases criminals and terrorists from prisons, allows mask-wearing yobos and drug-addicts to occupy forcibly the central offices of Athens University (and other Schools), now for 19 days, and considers “excellence” to be a social blemish!

Excellence and justice, as we know, are inner qualities and cannot be instilled by government laws. Laws normally prohibit (or prescribe) action, but can neither prevent nor motivate it: only fear or respect for them will motivate men in one direction or another.

Aristotle said – “I do of myself what others do for fear of the punishment by laws”.

Good education alone will instill or, to be more exact, help grow in young students the qualities of excellence, justice and love of truth.

But who in our days can perform such a task?… Who will educate the educators?… Certainly not gross materialists or atheists. And, alas, churchmen are concerned with other matters.

11. Finally, just as true philosophy teaches us that our true Self is the same as the Self of the universe and the Self in every other creature, so true Political Economy teaches that none should cheat, lie and steal. And it is curious to see that heavy punishments are imposed on murderers, rapists and thieves, yet liars, like the power-hungry politicians, go free all the time!

The one economic law of Natural Justice that should govern every community or State is that the product due to labor should go to the laborer and the surplus that is due to the existence of the community should go to the community. This is ignored by everyone, except very few. In our days this can only be achieved through Land Value Taxation. Any other form of taxation is sheer theft.

But here again very special education is needed to bring about a change in the mind of a nation so that it will recognise this principle. And at a period such as ours, when we roll rapidly into the dread Iron Age (=Kali-yuga) and traditional values and virtues are being pushed aside for the ever-growing desire to do as one pleases, who can undertake such education?

Yet LVT and only LVT can secure in the long run economic justice in society and constant development without the recurring cycles of recesses, unemployment, inflation and crises.

We should really see the Greek situation in this larger framework.

PS: I have an uncompromising contempt for communism, leftism and socialism, as you can surmise. But the recent resurgence of anarcho-leftist views is largely due to the absence of a true rightwing or liberal philosophy currently in practice, securing a just distribution of wealth, and thus countering effectively the decadent doctrines of the anarcho-left! So rightwing or social-democratic govts are just as much to blame.