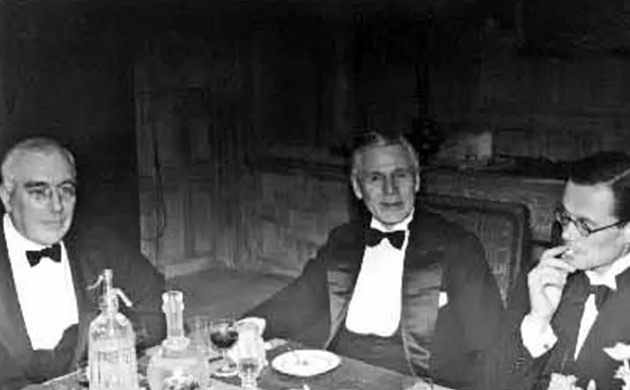 1. “I cannot pin down the day when I began to speculate about the inner state of P.D. Ouspensky” Marie Seton writes.

After lectures he would ask a few students including the young couple (who footed the bills) and MS to go to supper with him at a nearby restaurant. They would have drinks and food and time would pass pleasantly. Increasingly these parties would break up later and later. Often O was sharp with the students and they thought it was a test to awaken them. But he never ticked MS off.

Gradually O would stay on even after the others left and would ask MS to keep him company as he drank another and another and another glass. They would stay until four in the morning and even later – not because he had become enamoured of her “but only because he sought some companionship and he would talk for hours about his homeland but “always about things before he ever met the system of Gurdjieff” as she calls him!

2. Perhaps his close companions during O’s last days before death would say he was preparing for “recurrence”, strengthening his memory for his next life. Perhaps MS was not “developed” enough, as she admits, and did not understand him.

However, she felt that O was being nostalgic and, although he did not say so, “he was extremely unhappy” and that was why he had so many drinks.

She also felt he was sincere. And she felt his sincerity also when he explained that he broke away from G because “G had gone off the rails – become mad – and he (=O) wanted to save the System”.

3. One day O asked MS to cancel a group-meeting so they could go to dine at a restaurant with good food and wine. And so as they were drinking coffee MS asked, after considerable thinking about it, whether the dinner was worth cancelling a lecture and how fitting this was with the System. Also how fitting it was for O to lose his temper with the students. This is what, according to MS, O replied:

“They are such fools… I took over the leadership to save the System. But I took it over before I had gained enough control over myself. I was not ready… It is a long time since I could control my state of mind.”

“Will you not try to gain control over your temper? Everybody thinks you are testing them,” MS said never doubting that O was speaking the truth.

4. “They are such fools!” O said contemptuously.

“But I really feel I have learnt something from the System”.

“Then you are the only one…” O said. “The others are deluding themselves. They have never gained anything.”

“Why don’t you give up the lectures and try to gain control of yourself again?” MS asked.

“The System has become a profession with me,” O replied.

They had more frank conversations at subsequent dinners, MS continues, and she was struck by another revelation.

“In Russia,” said O, “there used to be a thousand or two thousand people at my lectures. Here there are a hundred – too few.”

And MS wondered whether the adulation of those rich people had led him to abandon, or had weakened, his desire to control himself.

5. On another occasion, always according to MS, O said: “I have become dependent on the comfort, the luxury. I can’t give it up.”

MS left soon afterwards. Then, years later, she learned that O had died and that during his last year he had found again his direction and had corrected himself.

I do wonder whether all these revelations are true or whether MS, writing in 1962, has reshaped in her mind the whole affair and puts words in O’s mouth. On the other hand, we saw in ES 25, §3-4 (link) the testimony of Gurdjieff himself stating in public that O had no permission from G and was not qualified to use G’s teaching. And in sifting all the earlier testimonies from O’s own writings, I came to the conclusion that the few years O spent with G were not enough to give him the control needed for esoteric teaching. (I read MS’s Memoir very much later.)