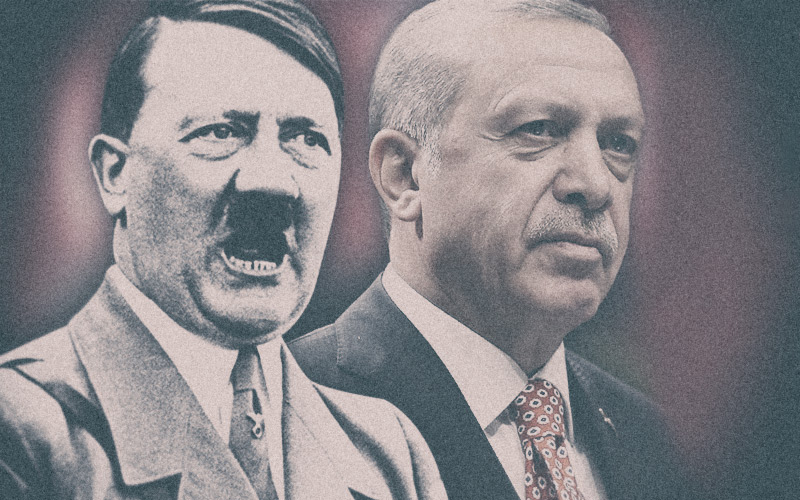 1. A nation which gave to Europe a real, bloodthirsty dictator, Adolf Hitler, and the Nazi horror that enslaved the continent for full four years has something unhealthy in its general culture, mentality and traditional values.

For a few decades after the 2nd WW, Germany, with the aid of America, Britain, France and other European nations and some sane Germans, recovered from its bout of madness, from its utter ruination in its physical condition and in its spirit.

For a few decades, under the influence of the realisation of its utterly inhuman, brutish treatment of all non-Nazi peoples, with remorse and with genuine revulsion against the communist threat, it joined the civilised nations of the West and worked for the goal of European Union. It was a most praiseworthy effort but only a very short spell in the life of a nation.

Germany still behaves with decency when pressed, but its unacknowledged alliance with Erdogan’s fascist regime, which runs against the interests of EU members (and seeks to annul Treaties of long standing), reveals the resurgence of its own past tendency of its rivalry with France (and Britain, which at present seems to be out of the game with its Brexit).

2. Turkey assuredly is a very large market with its population of nearly 80 million. It has also a strong presence in Germany itself with its sizeable body of 3 million immigrants. So every political party will court the favour of the Turkish voters and every government will seek trade and financial deals with Erdogan.

Germany is no longer a reliable leader of the EU nor a reliable partner of the other members of the EU. Its gross, opportunist, profiteering policy is plain now in its support of Turkish interests in the Eastern Mediterranean against Cyprus, against Greece, against Italy and against every other nation except Half-of-Libya.

But above all, against France which also has interests in the Mediterranean and has sped to support the EU members by sending a token naval force. Even the United Emirates have sent naval support!

With great speed Germany convened a conference on the Belarus issue but refuses to do so for Turkey’s warmongering and violation of the internationally accepted sea-zones of EU members. It finds cheap excuses and recommends “dialogue’.

Meanwhile Erdogan threatens war and violates international law! He accuses Greece of suppressing the Turkish minority just as Hitler accused the Chechs and the Poles of suppressing the Germanic minorities on their lands in order to gobble up the two unfortunate countries!

3. History does repeat itself – like the succession of seasons in the annual cycle – but also allows some variations so as not to appear too tedious and foreseeable.

The Turks are in their majority ruthless barbarians. Except for carnage, conquest, destruction, genocide and pillage, they have offered practically nothing to the human civilisation: they merely usurped others’ achievements.

They all but exterminated the Christians from their domain. They almost exterminated the Armenians and the Greeks in northern Turkey, the Pontians. Before 1960 there were more than 50 primary schools in Constantinople/Istanbul: today there are only three (yes, 3). They turn ancient historic Christian churches into mosques claiming they are theirs!!!

They seek to exterminate the Kurds. They usurped two fifths of Cyprus in 1974 and now part of Syria. With money from Qatar they have (August 2020) established a naval base in Libya. Why do they need bases there?

And all Europe sits and watches in stupor. While Germany claps in approval – because it sees Turkey as a force limiting France, Italy and Greece, its supposed sister countries in the EU.

4. And what will happen to the EU, to Europe itself, when Turkey grows even stronger, more arrogant and more aggressive with the silent support, possibly with the unobtrusive encouragement of Germany?

Unfortunately, the vision of the EU is fading because European leaders are too stupid or too short-sighted due to narrow self-interest, not realising that Turkey has need of the EU and every single member state much more than that the EU or any single member state has need of Turkey. Mere expressions of solidarity are not enough to curb Erdogan’s unbounded ambitions. Nor talks and negotiations. How do you negotiate with a pestilential virus?

The whole of Western civilised, progressive Europe seems to have forgotten the insatiable appetite for land and subject peoples of the Ottoman Empire. Erdogan’s military adventures in the Middle East and the violations of international sea-zones show all too clearly what will follow unless, he is stopped. Hitler was not stopped in time in the 1930’s and the world had to suffer 20 million dead….

Has Holland, Belgium, Poland, the Baltic States and the Balkans, forgotten what they suffered with the invasion of Nazis? Has Germany itself forgotten the horror?

Yes, I am fully aware of what I am writing!

5. The Isreali Mossant has warned the world that Turkey is much more dangerous than Iran. The world concerned turns a deaf ear – unconcerned, as it did with Hitler’s menace back in the 1930’s. And so allows the Turks to grab whatever they can and expand at the expense of other nations.

And I would remind the reader of the following: “Men fight for liberty and win it with hard knocks. Their children, brought up easy, let it slip away again… And their grandchildren are once more slaves.” So, very simply, D. H. Lawrence.

I would add: Before you lose liberty, you lose solidarity and peace. And before that, you lose perspicuity and intelligence due to stolid, stingy self-interest.