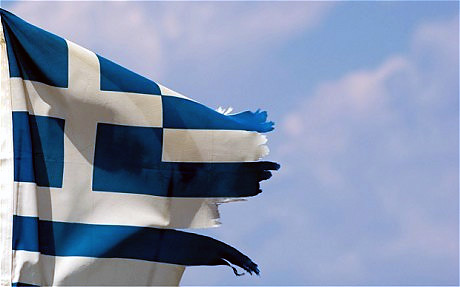 1. Let me state at the start that the cure for any ailing economy, and not only that of Greece, is Land Value Taxation. But let us look more closely at the Greek economy.

The international markets exhibit today greater optimism towards the prospects of the Greek debt than three months ago.

The Greek Prime minister, Mr. Samaras, constantly of late assures everybody that the economy is coming out of the deep trough of the last three years and that at the second quarter of 2014 there will be an ascending course of development. Several officials of the Eurozone and the IMF make similar, if more guarded, remarks; but they do so, one feels, only because they want to eulogize their policy of austerity measures imposed on Greece through a succession of Memorandums. Members of the Greek government, of course, cannot openly admit that things may not be going well and ceaselessly refer to impending foreign investments – which, however, do not materialize, since potential investors encounter the enormous bureaucracy in Greece, corruption at all levels of the state machinery and an inconstant tax-system. Some investments cannot, of course, be ruled out.

2. However, the actual facts and figures are not all that optimistic and  indicate a much harsher reality.

Unemployment remains at over 27% and the price-index remains generally almost as high as it was at the start of the crisis, despite enormous cuts in salaries and pensions which supposedly would have brought prices down.

However, now Greece has to cope with two negative factors which make the debt management much more arduous. First, there has been a deep depression with the GDP falling by about 25% so that collecting money through taxes to repay the debt is more difficult – particularly since little has been done to deal effectively with tax-evasion. In 2010 the debt was about 130% of the GDP whereas now it moves between 150% and 160%. Second, it will rise both in absolute figures and as a proportion of the GDP because of the need to finance the ailing banks; with this additional burden the debt is estimated to rise to 180% of the GDP.

3. What non-Europeans do not easily appreciate is that the Memorandum with its Austerity Measures of 2010 was not implemented.

What the Troika (i.e. three representatives of the European Commission, the IMF and the European Central Bank) proposed initially was very reasonable: reduction of the size of the state – the gigantic civil service, numberless organizations (often without object), nationalized enterprises etc; full development of the enormous but – alas – unchartered state property; the privatization of several state-managed firms operating at a great loss; the opening out of many tightly closed professions (pharmacies, taxis, solicitors etc); intense hunting down of tas-evaders. These measures would have meant about 300.000 unemployed at most.

Three successive governments refused to implement these measures (since most civil servants were appointed thanks to their political party affiliations) and were afraid of losing votes! Instead, they proceeded to cut ferociously salaries and pensions – except their own and certain classes of civil servants, like the employees of the House of Parliament. They also imposed a general property tax on all, fabricated new taxes and increased  old ones, the Value Added Tax being raised to 23% and at once swelling up prices.

4. The results were foreseeably disastrous. The private sector, the only seriously wealth-producing source, was crippled. The number of unemployed (1.3 million officially) is more than four times as many as the 300.000 that would have been discharged from the public sector. Moreover, a large number of those 300.000 would have been absorbed in the private sector, which would have breathed more freely as bureaucracy diminished.

Unfortunately, socialist notions with enhanced state intervention in the economy are held passionately even by so-called right-wing parties in Greece, because this enables the government to perpetuate the patron-client relations with civil servants and trade unions; but this  maintains corruption at all levels.

5. What the Greek economy needs is development, expansion, growth. This can only come with the removal of the impediments, which stand in the form of the monstrous state. One comparative figure should suffice. Britain with about 63 million people has 600 MP’s; Greece with only 10 million has 300!

Now at last, after repeated pressure from the Troika, the Greek government is making a slight reform in the tax-system. People, who have income from their employment only or from investments (stocks and shares, etc) and this is taxed at source, do not have to make tax-statements!

The real solution is L(and) V(alue) T(axation), which I have discussed at some length in previous articles. Here, I shall only emphasize three of its incomparable advantages.

a) It is easy and cheap to collect. All real-estate agents know the value of any unimproved plot in any area. A few assessors would suffice for the job – instead of the legions of taxmen employed today. Because the land values are so well known or easily ascertained, there will be no evasion.

b) It is a just  measure, since the surplus, reflected so accurately in land values, is the one and only proper fund to be taxed, being created by the existence of the community, the increase of population, the advance in knowledge, sciences and technology and by the public services offered by central and/or municipal authorities( schools, hospitals, water-supply etc).

c) Because marginal sites (usually farmlands) will be left untaxed since they are usually without surplus, the tax will not be passed into the prices; any such attempt will be soon nullified as many entrepreneurs will not raise their prices or new entrepreneurs will move onto non-taxable sites. And, of course, no lands in central areas will remain unused whereby speculation in land will be scotched and central lands will be readily available.

This is the way to true  and unceasing healthy growth.